We have had a great weekend! Friday night Lucy and I went to Girls + Taylor night over at the Coble's House and Jonathan got to have a Nintendo night over at his friend Matt Green's House. We had a lot of fun. We baked cookies and then covered them in icing and sprinkles and then proceeded to make ourselves sick with too much sugar. Then we watched Mama Mia! It was a pretty good musical. Laura kept saying,"I wish I would have brought Ryan to the theater when they were playing the sing a long version." (we thought this was funny because he would have hated it and probably would have walked out)

*Note* Remember how I said Lucy didn't know what she was saying when she was saying Dada. Well the other day I finished nursing her and I sat her up to burp her, she looked right at her Dad and smiled the biggest smile and then said, "aye Dada". It was so sweet!

Saturday, Jonathan and I loaded up Lucy and headed to the Promenade to finish up some last minute shopping. It was cold. I felt really bad for bringing Lucy out in such cold weather but I made sure she was bundled up. After feeling how cold it was we went ahead and bought Lucy a little jacket. Actually it's a heavy duty winter jacket. I don't think she will get cold any time soon.
(see picture below)

Sunday, We got up for church. I couldn't believe that we actually made it to the early service!! Lucy was great during the service. She looked around and smiled at the nice people behind us, who happened to be my sister and family. The only time she said a word was during prayer.

Anyway, that is our weekend and it wouldn't be a good weekend without some pictures!

Lucy getting ready to go shopping. This is her favorite thing in the world. Her bouncer. She loves to jump. 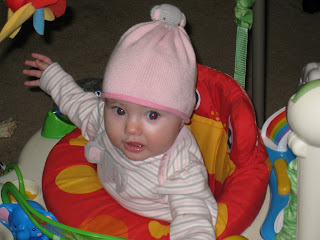 Lucy all bundled up in her new jacket.
FYI: Gymboree is having a 25% off sale on everything in the store! 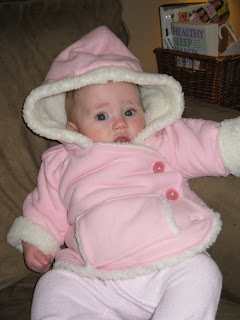 Sweet sweet stories. I can't believe that I just live for this blog!!! I am counting the days on 1hand now! Yea!!!

Lucy is getting so big and of course she is just to cute in that winter coat.
I also watched Mama Mia this weekend and Im a big fan of musicals so of course I loved it.
Have a wonderful Christmas