The night I almost died.

Last night was like any night. Jonathan and I put our kids to bed, we cleaned the kitchen, I washed my face and we both got into bed. We were watching an episode of I Love Lucy that my Lucy had left on that night. I decided that the night wasn't quite over and I told Jonathan that I was going to get a Popsicle. Not just any Popsicle but a Haagen Dazs ice-cream bar.

So I walked out to the garage, around the corner to the deep freeze, as I started to lift the lid, I noticed an electrical cord. "What is that?" I didn't recognize it so I followed the end of that rope to the start only to find a 4 foot patterned snake 4 inches from my bare feet!

I lost my cool and high kneed it back to the bed room screaming, "Snake, Snake, Snake!" Jonathan not being a fan of snakes was not excited when I told him he had to kill it. We opened the door to the garage and Jonathan peeked out and said, "It's not there." I died. There was a snake lost in our garage. I was pretty sure it was an anaconda or an king cobra or even a boa.

So we came up with a game plan. One of us had to go get the shovel and the BB gun out of the garage, the same garage where Mr. No Shoulders had taken up residency.

Guys, Jonathan called Brain Cancer and his card trumps mine. I had to go out to the garage to get our weapons.

So I prepared for battle.. I strapped on the tallest boots I owned and I high kneed it out to get our weapons. 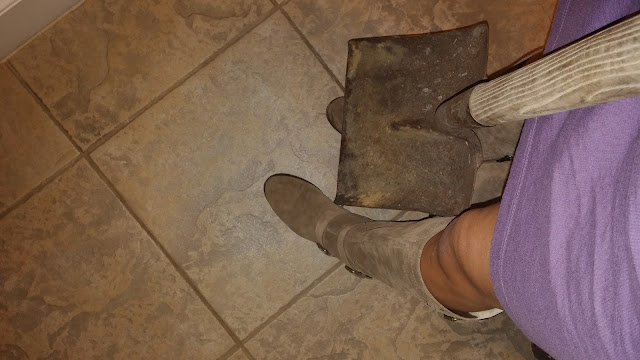 We had our weapons in hand and we got to work locating the snake. He was under a shelf. We had a direct shot to his head. So Jonathan shot him. In the head. And it ticked that snake off really bad. We could hear him moving and hissing and rattling. Guys, it was now a rattle snake! And it was mad.

Long story short we couldn't find it after we made it so mad. I had the brilliant idea of taking a step ladder that was right next to the door and we would climb on top of that and then onto the deep freeze and then we could see where the snake went from an aerial view. One of us had to do it. Jonathan decided that since I had the shovel I should go because it would be easier to hit him with that than shoot him with the gun.

I did it. I love that man. He has been through a lot. I will take on a snake for him. After a while of looking we still couldn't find him. After looking under the fridge and deep freeze we decided to check our garage shelves along the wall that this snake was last seen. I had a flash light and one by one I started to look. (I'm standing on the deep freeze, shovel in hand) The third shelf up at eye level laid our worst nightmare.

We shot him again and it just made him mad. I had had enough. I called the police. I non-emergency dialed them and they sent an officer right over, within 3 minutes. That officer called in backup. Before I knew it three policemen were in my garage.

One of them identified it as a cotton mouth and the other a rattle snake. I was pretty sure it was satan himself. They called in an off duty animal control officer. We had to wait 35 minutes on her to arrive. We all stood watch over this snake and waited.

She finally arrived. We told her to be careful. She put on her gear. Took one look at the snake and said, "I can't believe y'all woke me up with this." She lifted up the tool box that the snake had coiled under and grabbed it by the tail and slung it until she could get it's head. I'll never forget what she said next, "This is a rat snake. It is harmless." 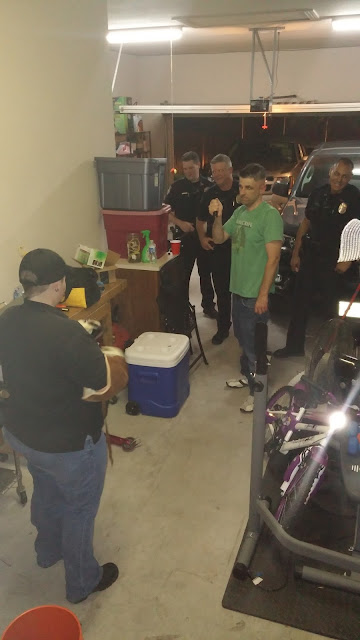 Then she gave us all a lecture on how Snakes will never come after you and you should never shoot at snake. She said he was just looking for rats and I needed to put everything in plastic boxes so that rats wouldn't come in and that would keep the snakes out.

So today for my birthday I have requested to have the house and yard pest and snake proofed and for garage organizers.

Jonathan and I crawled into bed at 1:00 but not before we checked under the bed and under the covers for anymore friends that might have tried to accompany us.

God is bigger than this and Jesus can fix-it.

Mary!! I am snort-laughing right now. happy birthday and stay safe over there!!!!

You're too funny. Hope your Birthday was wonderful